He is the lord of the constellations, stars and planets and the origin of everything in the universe. Salutations to Aditya who appears in twelve forms (in the shape of twelve months of the year) and whose glory is described in his twelve names. 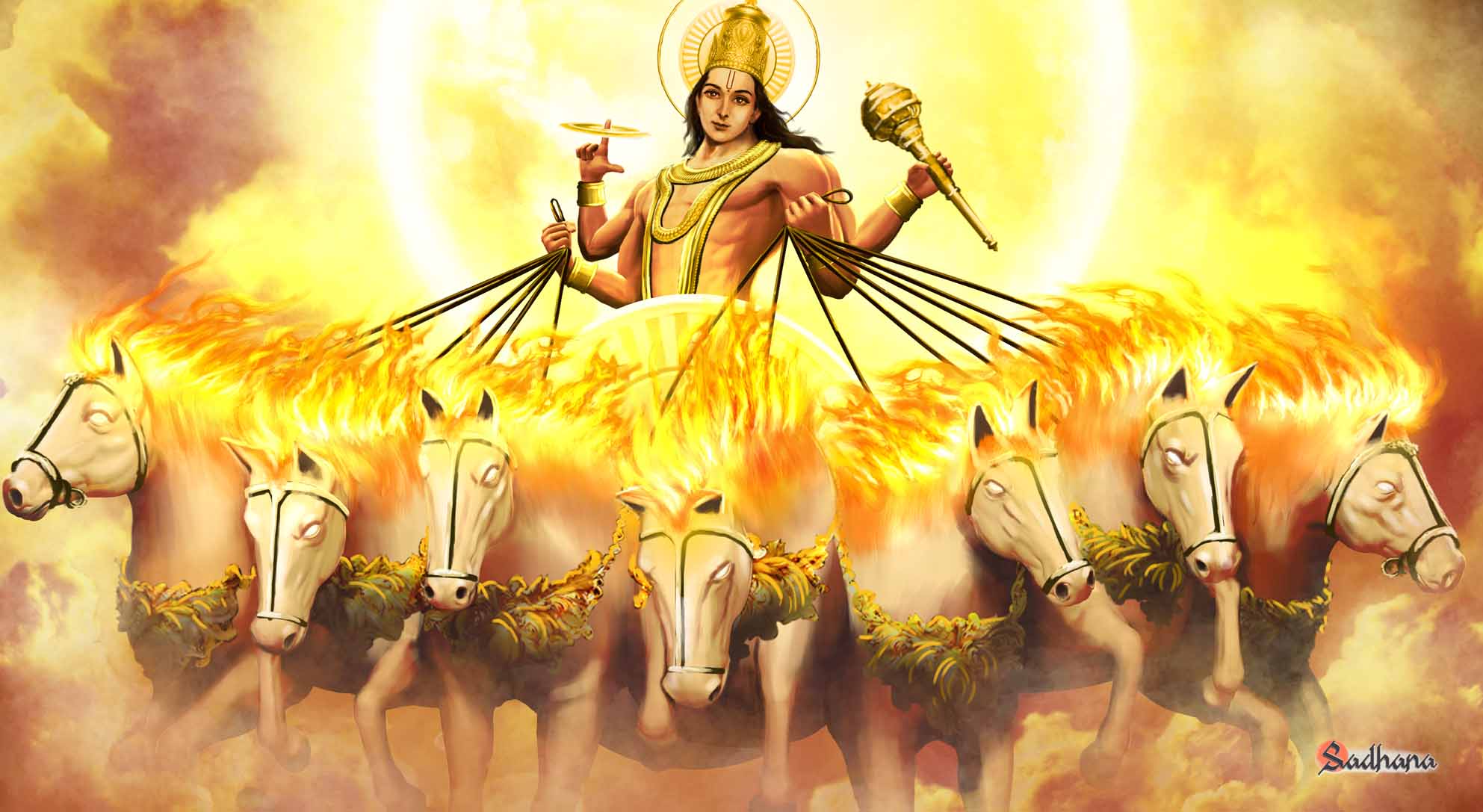 Bhagwan Surya Narayan, the magnificent Star of our galaxy, is not only the source of life for everything on our planet but also the manifest form of the unmanifested Parabrahman, the omnipresent, omnipotent and omniscient supreme consciousness.

It takes the Sun, which is the most central figure in Sanatana tradition, twelve months to move through the entire Zodiac, beginning from Aries and ending with Pisces. The energy of our luminous star, the Sun, is strongest while in Aries and the weakest in Libra which represent the lunar months of Chaitra (March- April) and Kartika (October -November) respectively.

Astrologically speaking, the Sun is debilitated when it enters the sign of Libra, in the month of Kartika. This is the perfect and most propitious time to align your energy with the brilliant and benevolent energy of the Sun which pervades absolutely everything on our planet, and develop a close personal bond with it and strengthen it multifold. Nothing like supporting the energy when it’s operating at a lower frequency and is at its weakest! It’s an excellent time to balance the scales of fortune and tip them in your favor by chanting the extraordinarily potent Siddha Surya mantra.

This alignment of the sonic energy of the mantra and solar energies can bring about profound and lasting transformation in you.

Who can do Kartik Sadhana?

Anyone, adults or even youngsters, over the age of 12 can do it; this includes menstruating women. One doesn’t need any formal initiation by a Guru to do this simple yet powerful sadhana.

When is the best time to start Karthik Sadhana?

This 30 day sadhana begins from the day the Sun enters the Zodiac sign of Libra according to the Vedic calendar. This date may change every year because the Vedic calendar is determined by the phases of the moon. The Hindu month, Kartik, is considered the most spiritually potent, and auspicious month in the whole year.

The significance of the Kartik month can be found in ancient scriptures such as Skanda Purana, Padma Purana and Shrimad Bhagvatam.

In the mantra above, it’s not hreem but hreeng, “ng” in hreeng represents a soft nasal sound, like we say Ma. If you have any confusion around it, just say hreeng the way it’s written. Anyday, it’s better than saying hreem.

The Meaning of the mantra

Here we have to understand a very profound fact of mantra science. Some mantras, especially the seed syllables (beeja mantras) have no particular meaning. While knowing the meaning of Stuti’s (hymns), shlokas, sahasranamas is recommended because it enables the practitioner to feel devotion towards the deity being invoked, mantras are actually chanted for the energy inherent in their syllables.

Every mantra is not a shloka and it is not necessary to know the meaning of the energy you are trying to invite into your world. Can you give the meaning of the word “Ma”? But when the child calls, the mother knows that he/she is calling out to her. Similarly the deity of the mantra knows he/she is being invoked by just the sonic vibrations of the syllables.

That being said, Ashva Tejasya is another name for Surya Bhagwan.

Vani is speech and ‘Adhovani’ means speech that is not pure, truthful, full of integrity and is established at a lower vibration. When Vani becomes ‘urdhv’ meaning exalted, a person attains vac siddhi. This mantra has the potential to confer vac siddhi  (absolute control of speech) on the aspirant.

Another interesting aspect of mantra sadhana is that mantras also have genders. The feminine mantras end with ‘svaha’ while the masculine ones end with ‘vaushat or phat’. The mantras which are neutral end with “namah’. They may be mantras of either feminine or masculine deities. The energy is neutral.

Since the beeja akshar at the beginning of this mantra is ‘hreeng’ the mantra takes on a feminine aspect even though the deity is masculine and as a result we chant ‘svaha’ at the end. So it’s the energy of the mantra and not the deity which determines how it ends.

Benefits of invoking this mantra

~Meditating on your manipura chakra, solar plexus (belly button) which is the fiery color of the sun, for these thirty days is sure to balance your pitta (bile) at the physical level and your samana vayu, thermal energy at the psychic level.

~If you are initiated into a mantra then this is the perfect month to work with it and further build upon and enhance its energy.

~This mantra has the potential to confer vac siddhi on the aspirant which means that the aspirant is completely in control of his speech and furthermore whatever he speaks will manifest in time.

~A person can attain vac siddhi by doing the purashcharana of this mantra which can be done through the guided Surya Sadhana in the Sadhana app.

~This mantra heightens intuition and confers well being, good health,strength and fearlessness to the practitioner. Although this mantra can be chanted all year round, its significance in the month of Kartika cannot be over emphasized.

How to do this Sadhana?

This simple month-long sadhana is done twice a day- morning and night, and there are two ways of doing this immensely power packed sadhana. The first option is to do it with actual ingredients and materials and the other option is to do it mentally, the mansik way by using the Sadhana app. The effectiveness and benefits of doing the sadhana the mansik way is equal to if not greater than doing it with actual ingredients.

Although mansik japa is more challanging as it is more subtle and requires greater concentration, the benefits are immense. Mental worship makes one more introspective and has the ability to silence the chattering mind as it cuts out all sensory distraction.

In case one is unable to do physical sadhana for any reason such as physical limitations, illness, travel, etc. mansik worship is the answer! Both options are mentioned below in detail.

Do it virtually without the need for any physical materials:

Bathe, don fresh clothes (preferably red) and enter the gates of the pristine and luminous Surya temple at Amravati in the Sadhana app. Visualise yourself sitting on your prayer mat in this tranquil consecrated space and chant the Siddha Surya Mantra in the morning with complete devotion.

In the evening, enter the Amravati temple again to perform the Surya Sadhana.

Enjoy the completely guided experience and watch your life transform!

The Karthik Surya Sadhana concludes on the 30th day in the morning after your japa.

The Karthik Surya Sadhana concludes on the 30th day in the morning after you offer water either at the shiva lingam or in the direction of the sunrise.

iOS
We use cookies to personalize your site experience: read more