Team Vedic Sadhana
The months of Chaitra (spring) and Vaishaha (autumn) are marked by Navaratri or nine nights, when sentient beings seek divine grace and offer prayers to the Divine Mother, Mahadevi, the dispeller of all gloom and harbinger of order and prosperity. 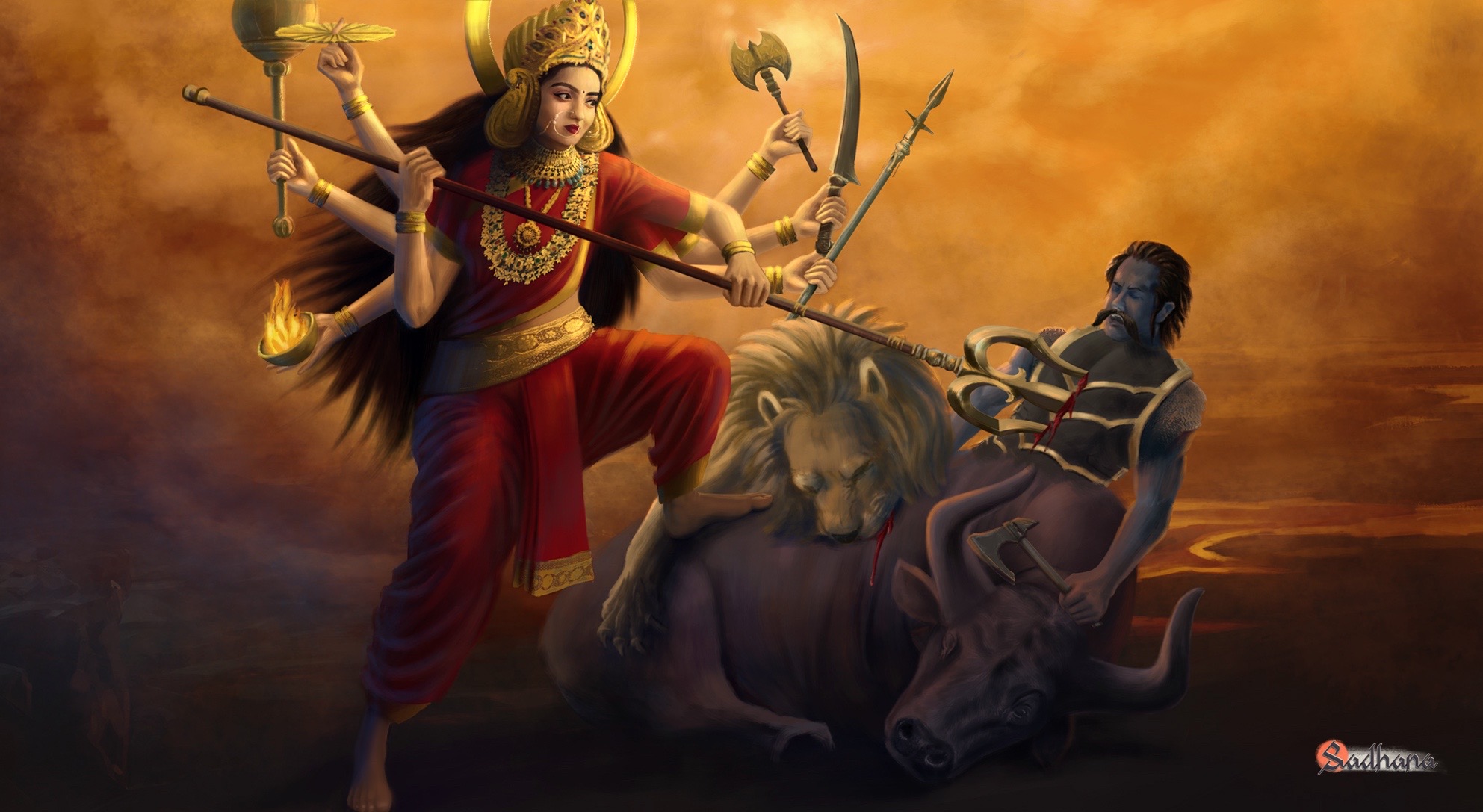 The nine forms of the Devi, collectively known as ‘Nav Durga’, are worshipped over nine consecutive days. Just as the night provides a pause to rejuvenate, ‘Navaratri’ allows devotees to turn inwards to invoke their own powerful feminine energy or ‘shakti’ and experience contentment and the divinity that pervades absolutely everything.

At a subtle level, these days are spiritually charged with the vibration of the intense penance of the sages, who have invoked the energy of the Divine Mother, over the ages.

According to the legend mentioned in the Devi Bhagavatam Purana it was during these nine days that Ma Durga, an all-powerful manifestation of Adi Parashakti herself, slayed the invincible demon king, Mahishasura, and thus, came to be known as ‘Mahishasura Mardini’.

Mahishasura, a ferocious asura, was conceived out of an unusual union between an asura or demon called Rambha and a female buffalo or Mahishi. Rambha had done extreme penance for thousands of years to please Agni Dev. When the God of fire finally appeared before him, Rambha wished for a son who would rule the three worlds as a powerful warrior, a master shape-shifter and sorcerer.

‘Tathastu. Take any female of your choice, and you will be blessed with such a son.’ Granting the boon, Agnidev vanished.

Having spent numerous years in intense Tapasya, the desire to consummate burned within Rambha. The first female he laid his eyes on was a beautiful buffalo. Overcome by lust, he coupled with her. While he was taking the buffalo to his realm, the Patala Loka, an enormous male buffalo charged at Rambha, and killed him instantly.

Overcome by grief, the she-buffalo walked into the funeral pyre lit for Rambha. Suddenly, a blinding light shot out. From it emerged a half-human, half-buffalo child. This was the birth of the formidable Mahishasura. He bore horns on his head, and a tail flicked ferociously like a whip behind his body. A little later, an asura with bloodshot eyes and distorted features also emerged from the fire. Reborn out of attachment for his son, this was Rambha, who had reincarnated as Raktabeeja or ‘born of the seed’.

Empowered by the boon, Mahishasura grew up to be a fearsome warrior. His evil forces began spreading their tentacles all over the earth. For thousands of years, he worshipped Lord Brahma even as Rakta Beeja guarded him against attacks by the Gods. Pleased with his severe penance Lord Brahma manifested before him and asked him to ask for any boon, Mahishasura immediately asked for immortality.

‘Anyone born will undoubtedly meet death and decay. Deep oceans, lofty mountains, the Earth and the glittering galaxies will perish one day. So, Asura king, ask me anything besides immortality,’ said Brahma.

“Revered Lord Brahma, then grant me the boon that no man from the three lokas—Prithvi, Patala or Swarga— should be able to kill me.” For a split second, Mahishasura reflected on what he would do if challenged by a woman. But hubris had corrupted his mind. He was convinced that no female warrior could ever be a match for him.

Suppressing a smile, he continued, “If I die, it should be at the hands of a woman.” Lord Brahma granted his wish and disappeared. Unknowingly, Mahishasura had sowed the seeds for his own destruction by the mightiest force in the Universe.

With time, he became the undisputed king of the Earth and waged war against the mighty Indra. Guided by Guru Brihaspati, Indra gathered the support of Lord Vishnu and Lord Shiva. The Devas had grossly undermined Mahishasura’s strength they realised. While the demons had spent hard years preparing for war, the Devas had instead indulged themselves opulently and become weak.

Mahishasura was unstoppable. He attacked Lord Vishnu and Lord Shiva and during one such deadly contest, Garuda and Nandi were also gravely injured. The Gods then realised that Brahma’s boon favoured Mahishasura, making their efforts futile. They quit the battle and left for their heavenly abodes. The devas, however, continued to fight for a hundred years. Finally, they fled the battleground and hid in caves and dense forests. Indra’s defeat led to a long era of darkness, with the powerful Asuras reigning over all the three realms.

Once the devas overcame their despair, they visited Lord Brahma and Lord Shiva. Lord Shiva reminded everyone that only a woman could kill Mahishasura. At the suggestion of Lord Vishnu, the Gods all unanimously decided to invoke their own inner energies and combine them to create The great Devi who would be able to defeat the Asura king.

A fiery red light emerged from Brahma’s brow; it was his feminine power. Similarly, a dazzling silvery Shakti emanated from Shiva’s brow, and a brilliant blue flame flowed from Vishnu. These three Shaktis representing Rajas, Tamas, and Sattva fused to form a vibrant-coloured flame. Dazzled by the spectacle, the devas also contributed their own powers. Soon, it became a raging fire and its brightness charged up the entire place.

A resplendent feminine form began to take shape from the dancing blaze. Goddess Durga, who was more brilliant than a thousand suns, finally emerged. The Gods had never seen or imagined a being more beautiful. They were dumbstruck. Tall as the sky, she had eighteen arms in which she carried various weapons. She wore magnificent ornaments, the likes of which could neither be created nor visualised.

Lord Vishnu commanded all deities to bestow her with their choicest ayudhas (arms and weapons). Indra gave her his Vajra, Yama, his danda, Vishnu manifested a second chakra from his Sudarshana, Shiva fashioned a trident for her from his own, and Varuna parted with a water noose. Brahma gave her a kamandalu with water from the Ganges while Kaala offered her an axe. Armed with such formidable ayudhas, Ma Durga stood in her splendid glory. The devatas offered a stuti and salutations to her. They entreated and almost pleaded to her to deliver them from the oppression of demon king Mahishasura.

A mischievous smile played on her lips as she spoke, “How astounding! The devas and Trimurti stand before me, trembling for fear of a Danava. Surely, Time is the strongest God of all.”

Sitting astride her ferocious vahana—a lion— she got ready to annihilate Mahishasura and vanquish his entire army.

Devas raised acclamations in her glory. “Simhavahini, Ma Durga ki jai!’ ‘Vijayi Bhava!’ She was a warrior, a mother, a protector; all rolled into one.

Devi represents the omnipresent cosmic energy that exists in myriad forms. It runs through people around us, just as she pervades nature. Devi Pooja allows the devotees to get in touch with their inner energy, expand their consciousness and express gratitude for all of Creation—the handiwork of Mother Divine.

Returning to the story, the thundering sound of Ma Durga’s jayaghosha and her resounding laughter was heard across the three realms. The Asuras were highly perturbed. They scurried to inform Mahishasura about the arrival of an exceptionally beautiful warrior woman. A lustful desire to possess her gripped Mahishasura’s heart.

“Bring her to me”, he roared. “Charm her with expensive gifts and sweet words. If she refuses, drag her by force. Her laughter has intoxicated my senses. Her rightful place is in my arms.” Mahishsura’s messengers approached the Goddess with some trepidation. They could not face her brilliance.

She guffawed when they urged her to marry their master and live a luxurious life. Fixing them under her gaze, she spoke grimly, “The only reason you are not burned to ashes is that you are polite in words and manner. I am not an ordinary Devi whom your master can conquer! I, marry a buffalo’s son? Go, tell him that death awaits him in the guise of a woman. The world and devas have suffered long enough. This ends now! Mahishsura and his clan should either go back to Patalaloka or die a glorious death fighting me.”

Mahishasura called a meeting to discuss the matter with his ministers. Some demons called the Devi an ‘arrogant woman’ and advised him to attack and take her captive. A minister called Dhurdhara pointed out that the Goddess’ stubbornness actually concealed her love, as women always said the opposite of what they felt, he believed. However, a wise old asura, Tamra warned him about the Goddess’s divinity and urged they return to their own world, Patalaloka instead.

After listening to them, Mahishasura stubbornly ordered his army to fight her. “Speak to her gently. Try persuasion with riches. If she retaliates, fight her with honour, and bring her to me.”

One by one, the Asura warriors fought with Ma Durga. She chopped off their heads even before they could raise a challenge. The battlefield became a whirlpool of blood with severed heads and mangled bodies.

Interestingly, most asuras had only observed her perfect body and mistakenly undermined the strength and divinity of the Goddess. The conduct of asuras highlights negatives, such as impure speech, anger, arrogance, and disrespect for women that lead to one’s downfall.

With no more warriors left, Mahishasura prepared himself for battle. Sadness gripped him, but he brushed it aside. He bubbled with excitement at the prospect of coming face-to-face with the stubborn, beautiful woman who had annihilated his army. He was obsessed with her and assumed the alluring form of a good-looking man. He could hardly believe his eyes when he saw her for the first time.

“Accept me as your slave from this moment on. Your beauty surpasses all words and descriptions. Your only rightful place should be by my side as my queen.” Goddess Durga remained unmoved and asked him to move to Patala or face a gruesome death.

Mahishasura realised in a flash that she had indeed come to slay him. He changed his form to a bull in fury and bellowed loudly, charging at her with all his might. Sounds from their clashing weapons shook all the planets. Mahishasura tried injuring Ma Durga’s lion, who gored his stomach. He used all the weapons and tricks he could muster, but finally, she sent her spinning golden chakra zipping at his throat and ended the war. Before he could even blink, his arrogant head lay chopped off at her feet on the ground.

Waves of happiness ran through all the worlds for order had been restored in the world once again. The Devas bowed down before Ma Durga. Nature bloomed once again, and all beings shone with her grace upon them.

The Mahishasura vadh tale symbolises several truths, the simplest being the victory of good over evil, no matter how long it takes. It also underlines self-transformation. Mahishasura and other demons represent inner vices such as ego, anger and lust that we battle with constantly. Winning this internal conflict requires an inordinate amount of willpower and persistence.

Just as Devi Mahalaxmi conquers the demon by staying on course unflinchingly, we need to build single-mindedness to overcome our negative tendencies on our own spiritual journeys’. She is also the inspiration, grace and courage needed to walk the path to eternal liberation from all that binds us. Jai Ma Jagadambe!

Invoke the powerful energy of Ma Durga at her temple with life-transforming Sadhanas and Yagyas, this blessed Navratri with the Sadhana App.

iOS
We use cookies to personalize your site experience: /www/sadhana_314/public/wp-content/themes/sadhana/templates/modules/cookie-banner.php on line 5
https://sadhana.app/news/navaratri/">read more